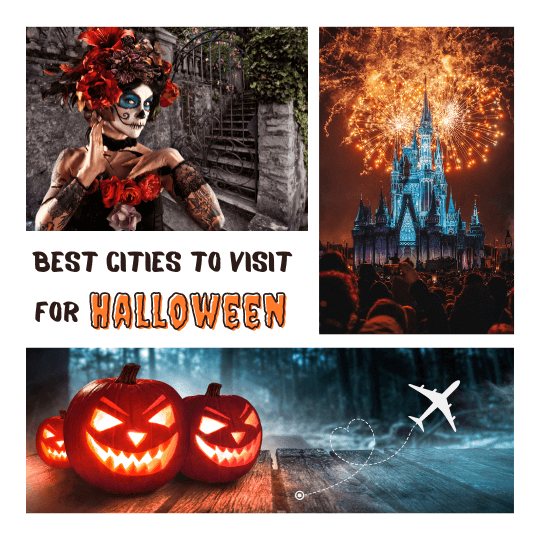 Halloween may have begun as a humble Celtic festival observing the thin line between the living and the dead, but it has risen to become one of the world’s most pre-eminent festivals. Less macabre than it once was, it’s no less exciting – and fun – for it, and there is no shortage of great activities in which to partake around the globe.

Let’s take a look at the best places to celebrate Halloween worldwide.

Halloween can trace its roots back to the Celtic festival of Samhain (roughly pronounced ‘sow-in’), and nobody throws a grim and ghoulish All Hallows Eve celebration quite like the Irish.

The best place to go is, hands down, Derry in Northern Ireland. The walled city is alive with the spirits of the dead on October 31st, and the people of Derry celebrate this with Europe’s largest Halloween party. Projections and installations can be found all around the city during the Halloween festivities. And the truly daring can venture into the Forest of Shadows, where mesmerizing spirits and ghosts lurk amid the trees, ready to pull the unwary to their doom…

There are few places in the world spookier than the haunted forests of Romania. One location is particularly noted for its ties to all things grim and grisly – the fog-shrouded groves and valleys of Transylvania.

Bran Castle – more commonly known as ‘Dracula’s Castle’ – may not actually have anything to do with Vlad the Impaler (the inspiration for Dracula), but it’s certainly a striking sight and a spooky place to spend Halloween nonetheless.

After having the day to yourself to explore the renowned castle, the festivities kick off in the evening with a full bar and spookily-dressed hostesses who’ll mingle and keep the guests entertained. What could be more Halloween than spending October 31st in a vampire’s castle?

Nothing has quite the innate potential for creepiness as escape rooms, and this manor in Ottawa fits the ticket perfectly.

The manor features several different escape rooms and puts on special events for Halloween which up the fear factor immensely. One such activity is called ‘The Asylum’ and is pretty much how it sounds. Players are locked in a creepy abandoned asylum by their sinister guide, who then disappears and leaves them to figure things out for themselves.

The highly atmospheric setting of this manor makes for a Halloween experience like no other. And this comes strongly recommended as a great way to spend your Halloween.

The infamous Salem almost needs no introduction. Site of the Salem Witch Trials in the 17th century, the town has long capitalized upon its reputation for black magic by hosting a fantastic Halloween party on October 31st.

Salem’s nightlife really comes to unlife over the whole month of October. In fact, with innumerable masquerades, discos, and parties across the city. Right from October 1st, you can get into the swing of things with a retro 80s Halloween disco. The more cultured folk might appreciate the Vampire Ball taking place on the same night. All these festivities are just a quick 30-minute train ride from Boston.

On the big night itself there are no fewer than three huge parties going on. You’ll find a vampire rave, a Halloween retro dance party, and a funky Halloween party at Gulu-Gulu café. There’s something for everyone in Salem on Halloween!

You may also like: Boston: The Original College Town

The Paris Catacombs are spooky whatever time of year you might venture down. Originally quarry tunnels, they were repurposed in the late 18th century as a makeshift ossuary (a repository for human bones) due to the overflowing graveyards above. In modern times, they make for an excellently creepy tour – and no night is creepier than Halloween.

Enter Kataloween – a (technically) illegal party in parts of the Catacombs that the general public is (technically) not allowed. The fact that the party is forbidden just adds to the spiciness. And what is more Halloween than having treacle shots at an illegal underground party, surrounded by human skulls?

Reputedly one of America’s most haunted cities, New Orleans (NOLA) has a long and proud history of association with voodoo, vampires, creepy black magic, and things that go bump in the night.

New Orleans’ celebrations for Halloween are second only to Mardi Gras for pomp and grandeur. And the city goes out not only on the big night itself but also for Devil’s Night (October 30th). NOLA’s Krewe of Boo offers a colorful Halloween parade and events throughout the city. For Anne Rice’s fans, the city that inspired Interview with the Vampire hosts a variety of ghost and vampire tours.

On Halloween night, the bravest revelers can venture into the city’s multi-scene haunted house at the Joe Brown Recreation Center. Others can simply party in the city’s famous (and extremely haunted) aboveground cemeteries!

Mexican cemeteries are a sight to behold on October 31st, as relatives take to the graves of their loved ones to decorate them with flowers, trinkets, and candles. Meanwhile, there are plenty of floats and parades in the streets, as the locals don their vibrant Day of the Dead garb and party all night.

The Scottish capital is renowned as one of the most haunted places in the UK. In fact, there is a whole raft of events going on to reflect this spooky heritage over Halloween. Edinburgh offers plenty of ghost tours to choose from, and the Edinburgh Dungeon is blurring the lines between supper and séance with its Dinner of the Dead.

Potter fans and those with an eye for magical adventures should check out the Harry Potter walking tour. You can book a free public tour (donations are welcome) or a private group tour and explore all the Edinburgh sites that inspired the Harry Potter series. Muggles welcome!

London’s fog-shrouded streets have long been home to ghosts and ghouls. And its Halloween scene reflects this with no small number of parties and parades.

One of the spookiest places you can visit is the Tower of London, where inmates waited before they were hanged or beheaded by the Crown. The London Dungeons make for a grisly look at the city’s dark past. And those truly invested in the macabre can do the Jack the Ripper Walk, which takes a look at the Whitechapel district where the infamous serial killer stalked his prey.

You may also like: How to Experience London on a Shoestring Budget

NYC might not immediately strike you as a great place for Halloween parties, but the truth is that New York has everything! (Also, the Ghostbusters are from New York!)

One of the best Halloween events in the city is the Greenwich Village Halloween Parade. Party-goers do their best to rival New Orleans and Mexico City in colorful, bombastic costumes. And the parade winds its way through the Village, with a great after-party held nearby for revelers to quench their thirst after all that parading.

The Halloween season is fast approaching, and Orlando is one of the perfect places to celebrate. Universal Studios Orlando has been celebrating Halloween for over 20 years and offers a variety of activities. For those looking for something a little more thrilling, the theme park’s Halloween Horror Nights is an annual event running from September through October. It offers haunted houses, scare zones, and live entertainment.

Mickey fans might prefer to visit the Disney World Parks and check out all their Halloween-themed events. Mickey’s Not-So-Scary Halloween Party offers live performances, fireworks, costume parades, and more. You can also trick-or-treat throughout the park.

Those looking to book an affordable Orlando vacation home will find plenty of options on Airbnb and VRBO.

Whether (un)living it up in Bran Castle or swilling wine next to human remains in Paris, there is no shortage of cool ways in which you can celebrate Halloween. Choose wisely, and revel in peace!