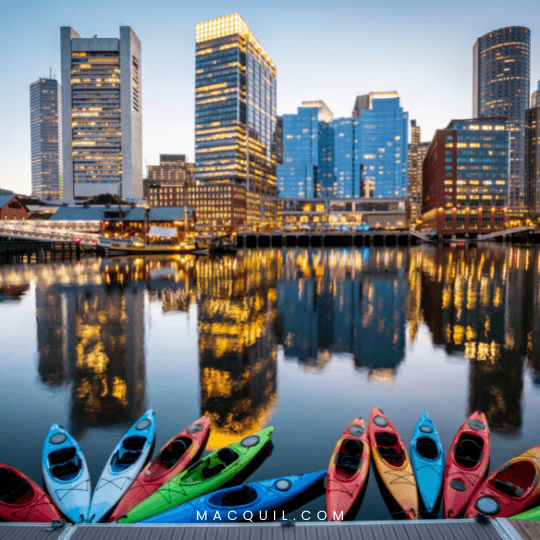 You may also like: How to Successfully Apply to U.S. Colleges and Universities

Located along the Charles River on Commonwealth Avenue, Boston University, the largest university in the Boston area, is well known for its academic programs in arts and science. Across the Charles River in Cambridge, you can find Harvard University, which is the oldest and –perhaps– most famous institution of higher learning in the United States. Also in Cambridge, you will find the Massachusetts Institute of Technology (MIT), a premier institution focused on cutting-edge engineering and technology.

One of the oldest Jesuit institutions in the USA, Boston College, is located in Chestnut Hill – a wealthy suburban area located 6 miles west of Boston. A few miles north of Boston on the Mystic River, you will find Tufts University, a private university known for its international and study abroad programs. Suffolk University, a small private university known for its law school and distance-learning MBA program, is located on Beacon Hill – a wealthy Boston neighborhood.

Boston is also home to many colleges that specialize in a variety of fields. Emerson College, a college known for its excellent academic programs in performing arts, digital media, and communications, is located by Boston Common. In the suburb of Wellesley, you can find Babson College, a college known for its business education and top entrepreneurial studies. Boston is also known for its cultural activities, conservatories, and art schools. Some of the most acclaimed music and art colleges, such as the Massachusetts College of Art, New England Conservatory of Music, Boston Conservatory, the School of the Museum of Fine Art, and Berklee College of Music, are located near downtown Boston.

With so many colleges and universities, a typical day in Boston is characterized by students walking, riding their bikes, taking the “T” (Boston subway), studying at libraries and cafes, eating and shopping at the Quincy Market, or getting together with classmates and friends. You will see students who come here from every state in the U.S. and from many countries around the world. You will meet the scientists, the academics, the philosophers, the artists, the musicians, the worldly, and the techies conglomerated in one city where the only one missing is you.

You may also like: How to Apply to Law School in the U.S.

The Best Cities to Visit for Halloween Around the World

How to Write a Winning Admissions Essay for Your College Application