When you want to view Paris from the top, four vantage points offer an easy access. Paris expert Phil Chavanne has located them for you. Take my word for it: there is more in Paris than meets the eye. Just look up, and you’ll discover statues, historical plaques, and interesting architectural details which you would completely miss if you were to walk and fixedly look in front of you.

Or try this: grab a map, climb an elevation, and look around, trying to place the monuments you see. Rent a top-floor apartment on the Montmartre hill, and you’ll see a whole new aspect of Paris.

To be honest though, you might have a hard time getting what you want in this respect: rentable top-floor flats located on a hill are in short supply in the French capital. That’s why I picked several easily accessible vantage points, so that you are able to soak in those panoramic views.

Granted, some of these spots were obvious picks. But I bet you don’t know a couple of them. Here is the story.

The Montparnasse Tower offers one of the most remarkable panoramic views of Paris. And not everybody knows that it can be visited. It is therefore my first pick.

The glass and steel tower was built over a period of 15 years in front of the Montparnasse train station, in the fourteenth district of Paris. It sits at the top end of Rue de Rennes, the shopping street which connects Montparnasse to St-Germain-des-Pres. Because the architects built the crescent-shaped skyscraper off axis, the perspective offered by Rue de Rennes extends beyond the horizon.

The Tower triggered a controversy which continued well after it was completed. Dwellers of the quaint old Montparnasse area hated to see a tall structure disfigure their area. They fought tooth and nail to kill the project. In vain. Constructions works started in 1958, and were completed in 1972. The Tower was inaugurated in 1973. Just a few months after the event, the City council passed an ordinance forbidding the construction of any building more than 7 floor high in Paris. Go figure.

A few more facts and figures: The Montparnasse Tower counts 59 floors and 25 elevators, and is 210 meter high. The top floor can serve as a helicopter platform. You can reach it in 38 seconds using the fastest elevator in Europe. But the bar on the 56th floor offers just as good a view without the chilly wind.

Yes, you did figure out this one. I picked it though as numerous subscribers to Paris-Eiffel-Tower-News.com ask me questions about it. I thought this would be a good opportunity to give you a few relevant figures.

The venerable tower was built for the Paris World Fair exhibition in 1889. It was meant to be dismantled after the exhibition but its architect, Mr. Eiffel, had other plans obviously. He even lived in the Tower for a while. The monument is 324 meter high at the top of the flag pole, and its steel structure weighs 7300 metric tons. The first floor stands at 57 meters above the river Seine, and the second platform at 116 meters.

To access each platform, you have a choice of taking the elevators, or climbing the 1665 step staircase. Sporty. I calculated that the waiting line to the ticket booth is 22 minute long on average.

You can have lunch and dinner on the Tower. Two restaurants grace its platforms: Altitude 95 on Level 1, and Le Jules Verne on Level 2.

Just a word of advice: wear a windbreaker when you visit the tower. The metallic structure is a big Swiss cheese, and there is absolutely no wind protection whatsoever on either of its platforms. 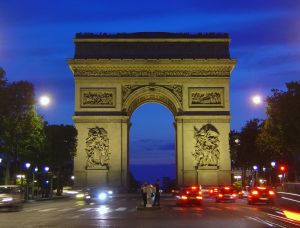 Going by the sparse crowd I met at the top of this monument in July of this year, I guess that not a whole lot of people know the Arch of Triumph is one of the best vantage points Paris has to offer.

This monument was erected to the glory of the French armies. Its four pillars bear the names of the killing fields where millions of European died uselessly to satisfy the blood thirst of one dictator or another. Commissioned by Napoleon I in 1806, the structure was completed 30 years later under King Louis-Philippe. At the base of the monument lies the grave of the Unknown Soldier, a Frenchman who was killed during WWI.

You can visit the inside and the top of the Arch. To get there, do not try to walk across the round plaza called Place de l’Etoile. Use instead the tunnel which opens at the top of Avenue des Champs Elysees. The ticket booth is located at the other end of the tunnel.

On the rooftop, a round gazebo features a ceramic map on which you can orient yourself in relation with the various monuments around. When you face the Champs Elysees Avenue, the Eiffel Tower and the Montparnasse Tower are at 2 o’clock, the Invalides dome at 1 o’clock. The Concorde obelisk stands at 12 o’clock, and the Montmartre hill is at 10 o’clock.

This venue isn’t quite as well known as the three others. I would even venture not many people are aware of it. Yet it offers a very decent panoramic view of the city.

When asked for the highest elevation in their city, most Parisians will reply “the Montmartre Hill”. Wrong answer: the highest point in Paris (altitude 128) is located at Rue du Telegraphe, No. 40. Right at the entrance gate of the Belleville Cemetery. This spot was used by the inventor of the telegraph, Mr. Claude Chappe, to set up and test his contraption under the French revolution (1789-95).

Down from Rue du Telegraphe, you are in the upper section of Belleville (literally “beautiful town”). This old Parisian suburb became part of the city in 1860.

Though renovation works started in the district in the 80’s, many streets have kept their old looks. Not all of them are safe at night, and I recommend you to visit the area in broad daylight only.

The spot I picked for you is at the top of the flight of stairs which ornates the Belleville Park, a green expanse of land which is bordered by Rue Piat, Rue Jouy-Rouve, Rue Julien-Lacroix, and Rue des Couronnes. Atop the stairs, you will enjoy a great panoramic west-southwest view of Paris.

Just a last word on Rue du Telegraphe: It hosts an interesting farmers’ market every Wednesday and Saturday, between 7 am and 2-3 pm.

***About the Author***
Phil Chavanne is the Senior Editor of Paris Eiffel Tower News, a city guide offering scores of information and useful advices for free at Paris-Eiffel-Tower-News.

A Guide to Punta Cana