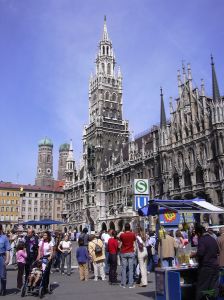 Even though Munich is only the third largest city in Germany it still has a lot to offer residents and tourists alike.

Over 1.3 million people live in Munich, and thousands of tourists travel through the city on a yearly basis. All of these people go a long way in making Munich one of the most financially profitable areas in the entire country. Munich also serves as the state capital of Bavaria so it has a very strong political pull as well.
Munich is located on the River Isar near the northern part of the Alps. This makes for great living conditions for residents and great views for tourists. The great landscape alone is responsible for drawing in many of the tourists that Munich hosts every year. And as long as the tourists keep showing up, Munich will continue to thrive in the financial markets.

If you are a tourist the weather in Munich may leave something to be desired. Since it is located near both the Alps and the sea precipitation can be quite heavy regardless of what time of the year it is. For residents, the precipitation is no big deal because they deal with it every day of their lives. But tourists can often times get stuck in bad situations when the weather suddenly changes, and the rain starts to come down in buckets. For this reason it is important for visitors to always be prepared for the worst. During the summer months the average temperature in Munich is about 70 degrees Fahrenheit. But when the winter months roll around, the cold temperatures are close behind. The winter months in Munich see low temperatures in the 30s as well as snow on a regular basis.

As far as attractions are concerned, Munich has many churches that have been mainstays for hundred of years. In addition to the churches in the area, there are also many castles and theaters that are of great interest to tourists. One thing in common about all of these structures is that they are beautiful. It is amazing that such complex structures could be designed and built so many hundreds of years ago.

If you want to relax, party, and have a good time Munich is one of the best places to do so in Europe. Even if you like to party all night long, you will never be able to hit all of the hot spots. Breweries, dance clubs, and bars are among the most popular areas for partying.

Munich has one main airport that services the area; the Franz Josef Strauss International Airport. This is one of the most modern airports in Europe, and has only been in existence since 1992 when it took over for the out of date Munich-Reim Airport.

Don’t think that just because Munich is not the biggest city in Germany that there is nothing to see. If you get caught up in this trap you will end up missing some of the best attractions in Europe. Even if you only get to spend a day or two in Munich it will be well worth the trip.

MBA Without an Undergraduate Degree? Yes, it's Possible!