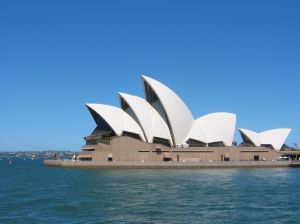 Beautiful beaches, unique wild life and amazing cosmopolitan cities are some of the things you will discover in Australia. Australia is the sixth largest country in the world offering miles and miles of wide open spaces and over 10,000 beaches. Spending Christmas at the beach or skiing in August may seem strange for some travelers, but Australia’s seasons are the opposite of the northern hemisphere – summer officially starts in December and winter in June.
Australia is a great destination for young travelers and students wanting to explore a rich and diverse territory. Some of the most interesting animals can only be found in Australia – kangaroos, koalas and wombats. Its aquatic life is rich and represents one of the most fantastic exploring opportunities for divers. Whatever it is you seek, you will find it in Australia. If you are looking for an exotic adventure, then head out to the Blue mountains or the Central Eastern Rainforest Reserve. Looking to spend some time relaxing on a sandy beach or diving in the ocean? Then travel east to Whitehaven Beach or the Great Barrier Reef. If a cosmopolitan scene is what you are looking for? Then multicultural Sydney, Melbourne and Canberra are top choices.

Hostels – Budget hostel-style accommodation with shared bathrooms and often with dormitories is approximately $20-$30 per person per night. Facilities usually include a fully equipped kitchen with adequate refrigeration and food storage areas which allow travellers to stay healthy and save money by cooking their own meals. All hostels also have living room areas equipped with couches, dining tables, and televisions to provide travelers with a cozy and relaxing environment. About 150 hostels are part of YHA Australia, a member of Hostelling International.
Hotels – All state capitals would have at least one major hotel up to 5 stars that is comparable to many other high profile hotels around the world. The majority of Australia’s hotels are located in the Central Business Districts (CBD) of the capital city. Hotel services and hospitality are often excellent such as room cleaning services, free morning newspapers, meals to your door and a high-speed internet connection up to 24mb/s (but often with a premium fee twice the cost of the local internet). All hotels would have a restaurant (or bistro, depending on the type of hotel you are staying in) on the ground floor next to the check in desk. The restaurant or bistro would often serve food that comparable to many other up-market restaurants outside the hotel. Also on the ground floor would normally be a fully equipped bar.
Motels – Motel rooms in the cities will generally cost $50 per person per night at the very least. Typically, motel-style accommodation will have a private room with a bed or number of beds, and a separate, private, shower and toilet. Breakfast is commonly included in the price of the room. A number of local and international chains offer motel-style accommodation: Budget Motels – over 460 venues in Australia and New Zealand; not plush, but clean and basically comfortable.
Pubs – In very small inland towns (population 5,000 or less) there may not be either hotels or motels; instead, local pubs usually offer accommodation to travellers. Pub accommodation tends to be budget-style with shared bathrooms but private rooms.

Australian cuisine is not as distinctive as say ‘Asian’. However, it does have merits that reflect the culture and region of Australia.
First, it should be recognised that Australian chefs are regarded around the world for their creativity and skillful mixing of Asian, Western and local dishes. One could argue that ‘Asian Fusion’ originated in Australia. Melbourne is a ‘foodies’ paradise and Sydney has many wonderful restaurants for locals and visitors alike.
There are four aspects to Australian cuisine for a visitor to look out for:
First, BYO. That means Bring your own/buy your own (alcohol). In many of the urban communities of Australia you will find very small restaurants where the menu and food is of the highest quality for an affordable price. And you can save money by picking up a nice bottle of local wine from a bottle shop around the corner. This includes beer as well. Expect to pay a small corkage fee.
Asian Fusion. From the Rockpool in Sydney, to many other restaurants around the country, Australia’s geographical and cultural relationship with South East Asia has resulted in some of the best Asian-inspired dishes in the world.
Counter lunch. If you were raised in an English household, you will know what it is to have a roast beef or lamb, potatoes and peas. Most traditional pubs in Australia offer what is called a counter lunch. For around five dollars, you can sit at the bar at lunch time and have a very hearty English meal of meat, potatoes, gravy and veggies. With a nice cold beer of course. This English influence is prevalent in a whole range of grocery store items like pasties and sausage rolls.
The BBQ (barbecue). Some restaurants and pubs have sort of buffets of raw steaks and sausages, lamb chops and kangaroo that you select, pay for, and then head over to a large communal grill and cook to your own perfection. BBQs are also a staple of Australian social culture. Due to the climate, many locals have a ‘barbie’ at least once a week. These social affairs are for families and friends to sit around in a garden, grilling everything from king prawns (giant shrimp) to steaks and anything else that will fit on the grill.

All foreigners except New Zealanders require visas for all visits to Australia. The citizens of some countries, however, can obtain an Electronic Travel Authority (ETA), which is a tourist or business visa valid for up to three month stays, at one time, up to one year in duration, online. These are often also available through travel agents at the time of booking your flight to Australia: apply for the ETA through your agent if possible, as the fee for applying directly is usually waived.
For more information on Australia, visit its official tourism site: Australia.com
Source for Where to Stay, Where to Eat and Visas and Documentation sections: Wikitravel Australia. The content in these sections was created by Wikitravel authors and may be used under the Wikitravel Copyleft license.