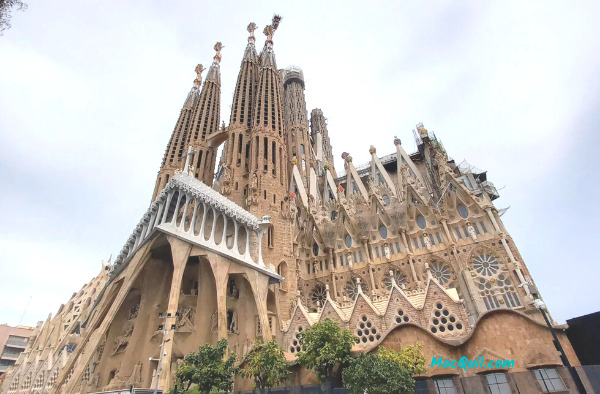 Barcelona – one of Europe’s most vibrant and interesting cities, and a huge tourist draw for anyone visiting the continent. With around 7 million visitors a year (pre-pandemic), it is the sixth most visited city in Europe, and by far the most popular tourist destination in Spain.

It’s easy to get overwhelmed when visiting such an iconic tourist Mecca, however. From which places are absolutely must-see to how to avoid common tourist traps (and the city’s infamous pickpockets), here are ten things you need to know before visiting Barcelona.

1. Barcelona is the Capital of the Catalan Region

Barcelona is the capital of Catalonia, an autonomous region that’s fiercely independent and has, on several occasions, tried to secede from Spain. Catalonia has its own language (Catalan, which looks a bit like French and Spanish combined) and many of its people don’t like being called “Spanish”. Furthermore, in Spain, the national language (the one you learned in high school) is called “Castilian”, and it can be offensive if you call the locals or the language “Spanish”.

If you really want to impress, learn a few words of Catalan before heading to Barcelona. It’s similar to Castilian Spanish, so if you already speak that, it should be very straightforward!

You may also like: 7 Amazing Places to See in Madrid on a Budget

2. Barcelona’s Nickname is not “Barça”

In actuality, the abbreviation for the city (and the one you’ll hear locals using) is “Barna”. This is the abbreviation you’ll see on street signs, too, and simply comes from ripping the middle out of ‘BAR-celo-NA’.

So what’s “Barça”? That’s the nickname for the world-famous football team. And don’t say “barca” (sounds like ‘barka’) – that’s a boat.

3. Avoid the Summer if You Can

Obviously, it’s tempting to visit Barcelona at the sunniest time of the year – all the better to enjoy the beautiful Mediterranean weather and explore the sights, right?

As Spain’s most visited city, this isn’t necessarily a great idea. Barcelona is overrun with tourists at this time of year, and this leads to an uptick in the annoyance of locals with boorish visitors, as well as a rise in thefts as a result of the city’s infamous pickpockets.

Our advice? Go in spring or fall. You’ll have a much better time for it.

You may also like: Top 10 Universities in Spain for International Students

4. Watch Out for Pickpockets

Barcelona is infamous for pickpockets, and while the truth is that it’s no worse than any other major European city, it always pays to be alert and look after your belongings.

While we could write an entire article on protecting yourself from pickpockets, the essentials are always the same: keep your valuables either in interior pockets or in a slash-proof travel pack worn on your front (never behind), be careful where and when you produce or check your valuables, and be very wary of strangers approaching you to initiate conversation (this is often a distraction while someone else rifles through your pockets).

As long as you’re vigilant and careful, there’s no reason why pickpockets should ruin your Barcelona vacation.

One thing worth bearing in mind when visiting Spain (and other Mediterranean regions such as Italy or the south of France) is that they operate on a very different timeline to that of many other countries. Due to the midday heat, Spaniards often have a ‘siesta’ (an afternoon nap) and will not have lunch until around 2:30-3 pm – a little late for Americans!

This, of course, means that they have dinner much later, too. Spaniards often won’t eat until around 9 pm, and it’s not uncommon to wait until 11 pm or later. This means that if you go to a restaurant at, say, 6 pm, chances are they won’t even be open – so start adjusting your dining schedule now!

6. Be Respectful of the Locals

One of the biggest problems for Barcelonans is noisy, boorish, or disrespectful tourists who treat the city like a theme park and pay no attention to how their behavior might impact the locals.

This is especially true in Ciutat Vella, the labyrinthine Old Town of Barcelona. The narrow streets and tall buildings cause no end of echoing, and irate locals have been known to dump buckets of water onto caterwauling tourists below. Bottom line: keep it down!

There is a trend amongst certain tourists to turn their nose up at doing the ‘typical tourist thing’, and in doing so skip some of the bigger or more obvious landmarks in any given destination. There is a certain appeal to this, certainly, if it means saving money or avoiding crowds.

That said: when in Barcelona, you simply have to see La Sagrada Familia. This unfinished (yes – it’s still not actually completed) Gothic-revival cathedral is an absolutely spectacular sight, both inside and out. Gaudi’s Sagrada Familia has to be at the top of anybody’s list when visiting Barcelona. It’s 26 euros by yourself and 30 with a guide, so it’s not exactly going to break the bank!

You may also like: How to Travel Italy on a Student Budget

8. Try the Local Food and Drink

Catalonia prides itself on having a very distinct culture from the rest of Spain, and no self-respecting visitor to Barcelona should leave without having tried some of the local specialties. Some of the best dishes include pa amb tomaquet (a simple tapas dish of toasted bread soaked in oil and rubbed in garlic and tomato), arroz negro (the iconic black squid-ink paella), and bacalao (salted cod). Wash it all down with cava, the local wine of choice, and you’re in for a good night. Just don’t expect to get any of it before 9 pm!

9. …Or Try Making the Local Food

You might even want to try your hand at learning how to make paella, the famous Spanish rice dish is not only delicious but also quite easy to learn how to make. Your bilingual instructor will talk to you about the origins of the dish and how to prepare it. You’ll also learn how to make another Spanish staple – the blood-red alcoholic punch, sangria.

Barcelona’s beaches are as beautiful as the city itself, sitting as they do on the shores of the Mediterranean. It’s only natural that you’ll want to roll out your towel and soak up some rays, then, but there are a couple of things to bear in mind.

Firstly, the city’s infamous pickpockets are particularly active on the beaches, so take care to come here in a group. Also, be wary of falling asleep (particularly given that you might also catch a nasty case of sunburn).

Secondly, there are numerous illegal drink vendors that patrol the beach offering cold beers and cocktails. While it’s quick and convenient, these drinks are generally overpriced, and often their ingredients will have been left in less than sanitary conditions. A glass of sangria might sound great, but that chopped fruit may have been left in or near a sewage outflow pipe to keep it cool – so think twice. Official bars are all along the beachfront, and you can rest assured that their ingredients are fresh and clean.

Barcelona is one of Europe’s most celebrated cities for a reason, and every visit there will be jam-packed with memorable occasions, amazing food, and unmissable sights like Sagrada Familia, Park Guell, Barceloneta Beach, Gothic Quarter, and more. Simply follow our tips when visiting Barcelona and you’ll be on course for the trip of a lifetime!

The Best Cities to Visit for Halloween Around the World